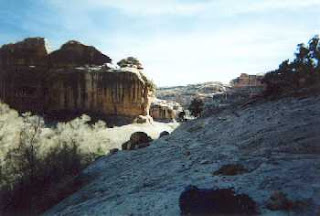 This trip documents the backpacking section between Collins Spring and Kane Gulch. A 38-mile weeklong trip, where you will camp under sandstone cliffs and discover the cliff dwellings and pictographs of the ancient Anasazi Indians civilization. Campsites can be found all over with only one major concern being water. Note: it's recommended that you check with the Kane Gulch Ranger Station when you purchase your permit for good water sources (individual seasons and times of the year can effect sources).

The route is pretty straight forward with canyon walls on either side and only 2 main navigation points to be aware of. The first is when you enter Grand Gulch from Collins Canyon, just go straight. The second is at Bullet Canyon, where you need to stay left to continue up the Gulch, although Bullet Canyon can be a possible variation for a shorter trip or a bail out point if someone turns an ankle, etc. All other side canyons are pretty much dead ends.

As for the trail, it starts at Collins Spring and quickly enters this immense drainage system with 600ft high canyon walls, freshwater pools and countless ancient ruins (opportunities abound for exploration of the side canyons and ancient ruins throughout the trip). Follow the trail 2 miles down Collins Canyon to the intersection with Grand Gulch. To the right leads you down through the Narrows to the San Juan River, go straight ahead to continue up Grand Gulch and you're on your way.

About 2.25 miles after the junction you should come across Bannister Ruin with its characteristic exposed beams (very fragile). Bannister Spring is located about a quarter mile below Bannister Ruin on the left. Next, you should come to Polly's Island on your left with Polly's Canyon on your right, just continue straight past the Island. About 1.5 miles past Polly's Island you should see the Big Man pictograph on the right about 200ft above the canyon floor.

From here you will pass 3 canyons on your left called Dripping Canyon, Step Canyon (the half way point) and Green Canyon, until you finally reach Bullet Canyon on you right with a heavily used campsite and water. Note: when you get to Bullet Canyon you're over halfway there with another 15 miles to go. Bullet Canyon is about 8 miles long and has two major ruins within its walls called Jailhouse and Perfect Kiva. The ruins are located about 2.5 miles up the canyon and make a nice side excursion from camp.

After Bullet Canyon stay to the left and continue up Grand Gulch. About a mile up the canyon, the first canyon on your right is Sheiks Canyon and contains an abundance of rock art called the Green Mask along with a spring. After you leave Sheiks Canyon, you should pass the rock formation called The Thumb Pour Off. About 4 miles past the Thumb Pour Off, you will come to Split Level Ruin on your left, considered one of the major houses in this canyon.

Junction Ruin is a huge alcove that bears John Wetherill's inscription. It marks the junction of where Grand Gulch meets Kane Gulch. Stay right and follow Kane Gulch 4 miles and 500ft in elevation gain to the trail end at Kane Gulch Ranger Station.

You must have a backcountry permit to hike in Grand Gulch. Groups of 8 to 12 must reserve a permit in advance through the Monticello Field Office. DO NOT show up at the trailhead, the ranger station or the Monticello Field Office with a group of 8 or more and expect to get a permit. Some walk in permits (for groups of less than 8 people) for overnight use of the canyons will be available at the Kane Gulch Ranger Station.

Day hikers do not need reservations and can register and pay their fee at the ranger station or the in the fee tube at the appropriate trailhead before entering the canyon. As for safety, be careful of slippery surfaces from water or ice. Know where to find dependable water sources. Watch out for scorpions, black widow spiders and rattlesnakes. The scorpions and black widow spiders have a tendency to hangout in the dry overhangs and dark ruins.

During July, August, and September there is a higher danger of flash floods, but whenever it rains you should always seek high ground. If trapped by a flash food just wait until the water recedes and then be careful of quicksand in the stream channels.

Directions: From Blanding, Utah (about 75 miles south of Moab) head south on 191 ~ 4 miles to the Hwy 95 junction and then take a right on 95 (west). From the junction head west for ~ 28 miles to Hwy 261. At 261 take a left and head south for ~ 4 miles to the Kane Ranger Station and drop off a vehicle. From the Kane Ranger Station backtrack to Hwy 95 north for ~ 4 miles, then take a left on Hwy 95 (west). Drive west on Hwy 95 for ~ 9.5 miles, then at the junction with Hwy 276 take a left and head southwest for ~ 6.5 miles and the Collins Spring turn-off on your left. After the turn-off, travel ~ 2.4 miles to a fork in the road, at the fork stay right. After another ~ 4 miles you will arrive at the Collins Spring trailhead (there is a sign). Make sure to ask for directions at the Kane Ranger Station.

For a map, pictures and more info click on Grand Gulch

"Please notify me of any new Trails"
Posted by Greg Rouse at 8:32 AM